10 July 1985 The Greenpeace ship Rainbow Warrior I was blown up.

I may introduce: Kini Jödler, who has been den wind blocked ...

The CSU chairman and Bavarian Prime Minister Söder criticizes the way the federal government is handling the current gas and energy crisis.

... He demanded that nuclear power plants should continue to be operated. In the current situation, it does not make sense to take nuclear power plants off the grid. In his opinion, the Greens were sticking to the shutdown of nuclear energy for ideological reasons; it is incomprehensible that the FDP should take part in this. Furthermore, the citizens would have to be relieved more. Specifically, Söder proposed reducing VAT on groceries...

For months, Kini has only known one or two topics: Akw running times and the alleged errors of the others. Own mistakes and omissions? No problem! He doesn't know and doesn't need self-criticism because he's the only true Kini from Bavaria. He cannot and does not have to think constructively ahead, because he is the only true ...

And the VAT on white sausages must also go down.

The Friends of MIC practice the "simple language" ...

About the current danger of under-complex thinking

... Christian Lindner and Friedrich Merz are demanding that the operating times of the three remaining nuclear power plants be extended in order to be able to counteract the strategic shortage of gas supplies from Russia. When they demand this, they show a high level of under-complex and non-holistic political thinking. Are they incapable of more complex thinking?

10 July 1985: The Greenpeace ship Rainbow Warrior I was blown up.

On the evening of July 10, 1985, divers from the French secret service attached two bombs to the hull of the ship. A meeting of Greenpeace activists took place on board at the same time. The first bomb detonated at 23:38 p.m. after the meeting was already over. However, the crew was still on the ship. Shortly thereafter, the second explosion followed, which caused the Rainbow Warrior to sink. Of the twelve crew members, the Dutch-Portuguese Greenpeace photographer Fernando Pereira drowned...

Dubbed "Operation Satanique" by the French secret service, the operation was financed from the "fonds speciaux", a sort of official "black box" that only the President of the Republic can access...

They protect the crops from too much solar radiation and also generate clean electricity at the same time: solar cells above fields and vines. The building permit for the Kaiserstuhl is still missing.

"20 years ago I could spend the whole day in the vineyard in summer, today I have to flee the site at 10 a.m. because the sun is already sizzling so hard."

Too few staff, hardly any coal and stricter immission control requirements: the power plant operators have to eliminate many problems in order to be able to generate electricity from coal.

"The elites are failing, they are unable to respond to the climate crisis"

Climate researcher Anderson says: The "Davos Cluster" blocks climate protection and leads us to catastrophe. Financial institutions deceive in the energy transition. Why the turnaround can only come from below. (Part 1 - 2)

The exit is not complete yet

"Towards the phase-out": This is the motto of two bike tours through northern and southern Germany, each lasting several weeks, with which opponents of nuclear power want to celebrate the forthcoming shutdown of the last nuclear power plants this summer. The Emsland, Isar-2 and Neckarwestheim-2 reactors are to be taken off the grid at the end of the year, regardless of all attempts at political revival. At the same time, the cyclists want to use the rides to remind people that the nuclear phase-out is far from complete. The uranium enrichment plant in Gronau, Westphalia, and the fuel element factory in Lingen, Lower Saxony, are known to be exempt from the phase-out and have unlimited operating licenses. And in the central interim storage facilities in Gorleben, Ahaus and Lubmin as well as at the nuclear power plant sites, the highly radioactive waste must be stored for decades until a final storage facility can be filled from 2080 at the earliest...

It is no coincidence that France announced the complete nationalization of the ailing electricity supplier on the same day that the greenwashing was successful in the European Parliament. A comment

France's energy policy sovereignty is cracking. Due to damage to nuclear power plants and heat waves, almost half of the reactors are idle. Gas-fired power plants are ramping up and Germany is supplying electricity from renewable energies.

Energy from waste heat: Researchers have discovered a particularly efficient type of thermoelectric material - solid matter that can convert heat directly into electrical voltage. In contrast to conventional approaches, short, strong heating changes the atomic structure of a metal compound made of iron, vanadium and aluminum in such a way that electrons become mobile. Once this threshold has been exceeded, even small temperature differences in the material are sufficient to generate tension.

In the energy transition, France relies on nuclear power plants operated by the energy company EDF. But he is struggling with cost increases - and is now to be taken over completely by the state.

The Nuclear lobby celebrates and the "Friends of MIC" set off a big firework of joy ...

In the future, gas and nuclear power will be considered sustainable and climate-friendly in the EU. The MEPs thus agree with a proposal by the EU Commission.

After an overnight stay in Jülich (11.7. research center and uranium centrifuge company ETC) and in Keyenberg (12.7.), the bike tour starts on 14.7. in Ahaus. On the 15th it goes via Gronau to Almelo, on the 16th to Lingen. Anyone who wants to take part in the activities in Münsterland/Emsland can also come spontaneously for the vigils, rallies, information stops or individual stages (Ahaus-Gronau-Enschede and Lingen are very easy and have a train connection). If you want to stay overnight, you have to register in advance with broadcast ...

A split mushroom for the traffic light

This week, the Union wants to submit an application for extending the lifetime of the nuclear power plant - and is putting pressure on the FDP. She is also more in favor of nuclear power - unlike her coalition partner. From the SPD it says: The debate harms the business location.

The South Korean government has drafted a new energy policy that aims to keep nuclear power at least 2030% of the country's energy mix by 30. In addition, construction of units 3 and 4 of the Shin Hanul nuclear power plant is set to resume after planning work was suspended in 2017 due to uncertainties over government policy on building new reactors.

In South Korea, the step back to the old, corrupt nuclear clique is glorified as a "new energy policy", and that's exactly how the "Friends of MIC" also like to do here in Germany.

After the decline in the previous year, more electricity was covered by renewables in the first half of 2022. The coalition agrees on the eco-energy expansion.

Solar energy: is there a new boom?

In the last six months, more solar systems have been installed in Germany than ever before.

The traffic light wants to bring decisive energy transition laws through the Bundestag this week. Compared to the ambitions of the old government, the plans are impressive. But as can be seen in the case of natural gas, a lot more could be achieved with the renewables.

A renewable energy system does not need nuclear power

A climate-friendly energy system is only possible with a rapid expansion of renewable energies. This is confirmed by a meta-analysis of current studies on energy system change. Nuclear energy, on the other hand, would slow down Germany's energy transition.

"Then we live on another planet!"

Climatologist Anderson says: We are heading towards catastrophic global warming. But governments continue to deceive when it comes to climate protection. Scientists are also involved in greenwashing. (Part 1 - 2)

Germany's last factory for rotor blades is closed on the Baltic Sea coast. Construction of new wind turbines continues to be far too slow

In March, Australia's east coast was hit by severe flooding. Now, after heavy rains, the levels are rising massively again.

Fossil paths, the great climate club and waiting for the energy summit

Calendar week 26: Claudia Kemfert, energy economist and member of the editorial board of Klimareporter°, calls for an energy transition summit and an emergency program against the fossil energy crisis. That would mean, for example, immediately approving renewable systems, starting a booster for skilled workers, stopping new gas heating systems and launching a large heat transition program.

Activist against illegal mining in Venezuela:

Virgilio Trujillo Arana fought against the overexploitation of nature and armed groups in the Amazon. 2013 environmental activists have died in Venezuela since 32.

Global security is only possible together!

The nuclear weapons ban treaty as a solution for real common security.

Since the start of the Russian attack on Ukraine in violation of international law and the increasing escalation of the war, the nuclear threat has become publicly noticeable again for the first time in more than 30 years. The international conference on the nuclear weapons ban treaty (AVV), which ended last Thursday in Vienna, was therefore all the more important.

Nobody needs nuclear weapons, only MIC ...

January 22, 2022 - Four nuclear-armed states are ready for war - this treaty could stop them

A Brief History of Peace

US President Dwight D. Eisenhower: Warning about the military-industrial complex

The Nuclear Weapons Prohibition Treaty is an international agreement that prohibits the development, production, testing, acquisition, stockpiling, transport, deployment and use of nuclear weapons, as well as the threat of them. On January 22, 2021, 90 days after the 50th ratification, the treaty came into force.
In December 2016, the UN General Assembly adopted a resolution mandated to negotiate such a treaty. The first round of negotiations took place in New York in March 2017, the second in July 2017. 132 of the 124 member states took part in the first conference and 193 in the second, including Austria as a co-initiator. The drafted treaty was approved on July 7, 2017 by 122 votes; the Netherlands voted against, Singapore abstained. At the UN General Assembly in September 2017, 53 countries initially signed. As of June 20, 2022, 86 states had signed, 65 states had ratified the treaty... 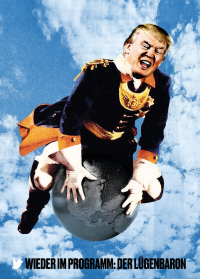