On May 15, 2012, Rainer Moormann and the journalist Jürgen Streich turned to Christian Küppers, the chairman of the investigation committee that deals with the history of accidents and the previously unprocessed radioactive water ingress at the AVR in 1978 in Jülich.

The Forschungszentrum Jülich (FZJ) typically refused to provide the two critics of the pebble bed reactor with detailed information on this widely ignored accident. However, the two have found a different source of information and are now giving initial indications of facts and questions that have not been sufficiently considered. You write: "We have started looking through newly accessible documents on technical safety issues and incident processes and can already say that our worst suspicions have been exceeded - also with regard to dealing with criticality risks and even unauthorized manipulation of the reactor protection system in the course of the above 1978 event. "

Radioactive water in the soil since 1978

Moormann and Streich point out that 25 - 30 t of highly radioactive accident water in the soil and in the groundwater was only discovered after 21 years in 2000 and that additional measurements will be necessary during future renovation work in order to arrive at realistic assessments of the health hazard potential .

According to the official version, most of the radioactive strontium has remained on site and has only left the reactor site to a lesser extent. However, in the opinion of Moormann and Strauch, it is urgent to check whether mobilizing influences such as changes in the pH value can be ruled out over decades.

Moormann and Strauch consider the concentration of tritium to be very problematic:

"There is still the possibility that larger amounts of tritium than HTO could be found in the vicinity of the defective floor joint during the draining of the water from the reactor and during the perhaps somewhat amateurish attempt to solidify the radioactive water with a hastily brought concrete mixer If this were the case, the AVR would have led to the largest known radioactive groundwater contamination in Western Europe: We have the currently valid drinking water limit of 100 Bq / l for tritium with a total amount of spilled tritium of approx. Compare 500 billion becquerels.
So the question is: Is it definitely certain that this tritium has taken the probably more harmless route into the atmosphere through evaporation, instead of going into the groundwater? Or was this argument perhaps in the foreground of not having to admit massive radioactive groundwater contamination and thus further reduce the market opportunities for pebble bed reactors? As you probably know, the expert at the time was hoping for the South Africa pebble bed reactor project PBMR and was relatively heavily involved there from around 2000 until its collapse in 2010. "

Has the groundwater been radioactively contaminated?

After the accident in the waterworks, no noticeable amounts of tritium were discovered on the lower floors. According to the official version, the groundwater contamination that has occurred is limited to the upper groundwater level, while the public drinking water was withdrawn from lower levels. However, this does not mean that an all-clear can be given:

“Regarding argument 3 it should be noted that

a) In addition to public drinking water abstraction, there are also other forms of groundwater use (irrigation, cattle watering, etc.), which would preferably have affected the upper floor. Can such uses of the upper groundwater level be definitely ruled out for the period 1978-1982 in the downstream of the AVR?

b) According to information from Rheinbraun experts, there are connections between the groundwater levels in the relevant area. Can a seepage of radioactivity into deeper groundwater levels with drinking water abstraction be ruled out with sufficient certainty? Was the sequence of sampling in the waterworks for tritium measurement so close that a temporary “tritium cloud” should have been discovered in any case?

Finally, the question that arises for us is how exactly the tritium emissions were recorded via the exhaust air. As you may know, from 1966 to August 1973 it was not noticed that the tritium filters on the AVR were not working and that all tritium was released into the environment unfiltered.

Against the background that the frequent cases of childhood leukemia (1980-90) that occurred in the Jülich area can, at least in terms of time, be related to the AVR water ingress accident, we consider a thorough processing of these questions to be absolutely necessary. In particular, what we consider to be the premature dissuasion of FZJ, AVR and some official bodies in this matter should be questioned, because the population is entitled to complete documentation of the release processes and possible health consequences, including all uncertainties. "

In conclusion, Moormann and Steich point out that in December 1987 it was experimentally established that the small THTR in Jülich had much higher temperatures than previously assumed at certain points. The question is asked whether the high temperatures during operation from 1974 to 1987 were outside of the 13th supplementary notice to the AVR approval. In other words: Was the reactor even operated within the approved legal requirements?

Unwanted results will not be published!

Incidents, high temperatures and water ingress at the AVR were calculated using the WAPRO computer program at the Jülich Research Center. However, only on the basis of estimated peak temperatures that are far too low.

"Calculations with higher peak temperatures are only known for reactor conditions from 1988 onwards, ie for less problematic cases with an overall lower temperature level of the reactor. To our knowledge, WAPRO results are also true for the problematic conditions 1974-87 (gas temperature 950 ° C plus real Graphite peak temperature of over 1300 ° C) was generated, but was never made public because of the undesired results (design accident not controlled, reactor therefore unsafe). We would therefore recommend that you request such WAPRO results from AVR. "

It is hair-raising how the FZJ has dealt with unpleasant test results and with the safety of people for decades. Here the tip of an iceberg becomes visible. What else will come of it?

In May 2012, the monthly business newspaper “brand eins” published a longer article about Rainer Moormann with the title “Can truth be sin?”. You can read it here: http://www.westcastor.de/br1.pdf 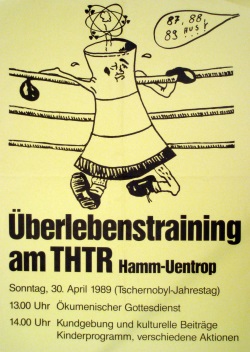