The THTR Circulars from 2010 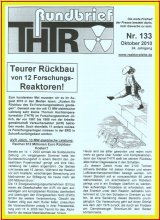 HTR research in Germany from 2008 to today 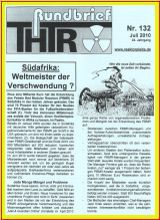 All that remains of the planned reactor is a mailbox company. Debate about shortcomings and problems in South Africa. The shortened program at the HTR conference in Prague shows the desolate situation.

On the Westerwelle to the nuclear Nazis and back. Nuclear-liberal continuities in an attempt to bring dictatorship, nuclear power and atomic bombs together. Nazi scientists helped build Brazil's nuclear program.

New hammer SPD-MDL made coalition offers to the FDP on the second day after the NRW election. 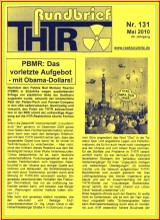 Atomwirtschaft-Zeitung pays homage to the bankrupt reactor. Poland should be talked into THTR.

South Africa is selling ailing PBMR technology to the USA.

Rotgrün is now fighting against its own 10-year THTR funding policy - if it is continued by Pinkwart!

Green attempts at appropriation. Inadequate basic knowledge of some demonstrators in Ahaus. 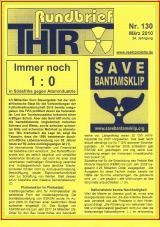 Still 1-0 in South Africa against the nuclear industry.

The slow farewell to the PBMR. 75% of all PBMR employees have been laid off. State subsidies reduced from 700 million euros to 1 million euros. Hope USA?

Soon another THTR barrack (s) in the USA?

Al Gore and Obama want to develop HTR in the long term and ignore their own experiences in the USA: The bankruptcies with Peach Bottom and Fort St. Vrain.

Help comes from the FRG and South Korea.

Chimney collapse next to the THTR in Hamm. Underestimated danger from permanent construction site. 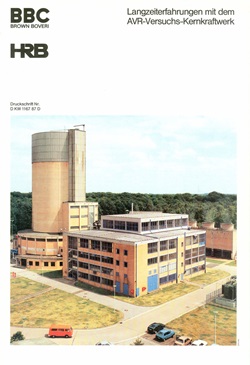