This PDF file contains a list of known accidents and releases of radioactivity. As new information becomes available, this list will be expanded and updated...

The first five repository tunnels excavated in the Finnish repository

The Finnish disposal company Posiva Oy announced that the excavation of the first five repository tunnels in the Onkalo underground repository near Olkiluoto has been completed.

The cause of the blob seems clear

In recent years, a deadly warm-water bubble has repeatedly spread in the Pacific. The heating of the earth is the reason for the phenomenon called blob.

Scientists from the renowned MIT have presented a variant of a thermo-photovoltaic (TPV) cell that converts heat into electricity with an efficiency of over 40 percent. It is therefore somewhat more efficient than the usual steam turbines. Most of our power supply consists of heating water by some means - burning fossil fuels or fission - and running the steam through a turbine. The efficiency is ultimately limited here, since a large part of the heat is ultimately given off to the environment.

The EEG surcharge is completely eliminated as of today

The EEG surcharge in the electricity price will no longer apply from today (July 01.07.2022st, 3,72). Most recently, the EEG surcharge was XNUMX cents per kilowatt hour. As of today, it will be lowered to zero.

North Atlantic Treaty worries about security from environmental damage. War in Ukraine and rearmament increase this danger. This is obfuscated - like other threats.

Expert opinion on Würgassen: No provision for nuclear waste is necessary

The CDU member of parliament Uwe Schünemann is certain: the federal government must now stop planning to set up a camp in Würgassen.

International experts are emphatically warning of the EU's plans to classify nuclear power as a sustainable investment. In a letter to the EU Parliament, scientists and experts from the field of nuclear energy - with the leading participation of the University of Natural Resources and Life Sciences (BOKU) Vienna - argue why investments in nuclear energy do not make economic sense and are also dangerous and also not suitable for solving the climate problem to solve.

Wind power: OX2 wants to build the world's largest wind farm off the coast of Sweden

The Swedish wind power company OX2 has applied for a permit for an offshore wind farm with a capacity of 5,5 GW.

Prevented GAU 1983 and other incidents

On June 30, 1983, an incident occurred that those responsible kept secret from the public: According to "Spiegel", the secondary circuit collapsed after several pumps failed and due to operating errors, the water continued to heat up, radioactive steam and hot water shot out a defective auxiliary valve. After more than three hours, all valves could be closed with improvised measures, a GAU was just prevented ...

Julian Assange has betrayed the real "arcanum" of American empire - the fact that popular sovereignty and democracy are nothing but a farce - and for this he is so hated by the rulers and their henchmen. An excerpt.

Radioactive water leaked into the Baltic Sea from an interim storage facility.

On June 29, 2005, radioactive water from the interim storage facility for low and medium-level radioactive waste in the Swedish Forsmark NPP entered the Baltic Sea. Ten times the normal level of radioactive cesium was measured in the waters near the power station. According to the Swedish Radiation Protection Institute SSI, however, this is still within the permissible limits. Corroded tin containers with radioactive waste were probably to blame for the leak.

Kretschmann against longer terms of nuclear power plants in BW

Prime Minister Kretschmann makes it clear that the nuclear power plants in Baden-Württemberg should be taken off the grid regularly. And he sharply criticizes his coalition partner, the CDU.

Criticism of the wind-on-shore law: Juwi fears approval dents by 2026

The declared goal of the federal government is to accelerate the expansion of wind energy in Germany with the Wind-an-Land-Gesetz (WaLG). However, the draft passed by the federal cabinet in mid-June has met with severe criticism. The project developer Juwi sees the danger that the expansion of wind energy will come to a standstill by the end of 2026.

Büchel as a potential target: protest week against US nuclear weapons in Germany

The peace organizations International Doctors for the Prevention of Nuclear War (IPPNW) and the International Campaign to Ban Nuclear Weapons (ICAN) mobilized for a week of protests against US nuclear weapons in Germany at the beginning of July.

The EU Council of Ministers is voting today on the planned ban on new cars with combustion engines from 2035. Germany's position was recently disputed in the traffic light coalition. Environment Minister Lemke wants to vote yes, but expects long negotiations.

The Barsebäck nuclear power plant was considered particularly dangerous in neighboring Denmark, as it is only 20 km away from its capital Copenhagen on the other side of the Öresund. The Öresund is one of the busiest waterways in Europe and Copenhagen Airport's approach path is close to the nuclear power plant.

On July 28, 1992, hot steam shot out of a defective valve into the reactor hall at Barsebäck-2, taking with it large quantities of rock wool that had been used as insulation. The rockwool clogged all the filters in the emergency cooling system within 20 minutes, a time that nobody expected. Fortunately, Sweden avoided a serious accident because the normal cooling worked. The incident resulted in the temporary closure of Barsebäck I and II, Oskarsham I and II and Ringhals as well as expensive conversion work. Denmark has called for Barsebäck to be closed, as it has done several times before...

The energy is running out

When renunciation changes from "can" to "must".

Gas is not enough in the long run, prices are rising: what was previously used to will soon become a luxury even for the middle class. This is the new challenge.

The cabinet will present its plans for two new nuclear power plants in the Netherlands this week.

A majority in the Danish parliament has spoken out in favor of a significant expansion of renewables, the government announced at the weekend. In addition, gas for heat generation is to disappear from residential buildings by 2035.

By 2035, 845 TWh would have to be generated from renewable energies, more than three times as much as today, according to the Agora Energiewende think tank.

Undead nuclear power: no matter what the arguments against it are

And once again nuclear power is supposed to save us. This time because Putin is turning the gas tap. It's not about arguments, just about ideology.

According to a study, the G7 countries invest on average almost as much money in the climate-damaging fuels coal, oil and gas as in the expansion of renewable energies.

Final storage of nuclear waste - only where and how?

For everyone who is now calling for the lifetime of nuclear power plants to be extended: we still don't know what to do with the old nuclear waste and we should finally decide on a location.

The Nuclear repository in 3D | Terra X - Nuclear waste - soon on your doorstep?!

Despite the UN Convention against Torture:

Where torture is "the order of the day".

On paper, 173 states outlaw torture, yet many of these countries abuse critics in prison. Experts fear that Julian Assange is also threatened with torture in the United States.

According to a new study by the German research institute DIW and the Technical University of Berlin, nuclear energy is far less reliable than previously thought. The study, commissioned by the Swiss Energy Foundation (SES), raises serious questions about the viability of nuclear energy as a long-term energy solution.

Nuclear energy is dangerous and the reactors are old and dilapidated...

Corrosion in the truck

Stress corrosion cracking is the formation of transcrystalline (through the structure grain) or intergranular (along the grain boundaries of the structure) cracking in materials under the simultaneous influence of purely static tensile stress or with superimposed low-frequency pulsating tensile stress and a special corrosion medium. Tensile stresses in the form of residual stresses are also effective ... 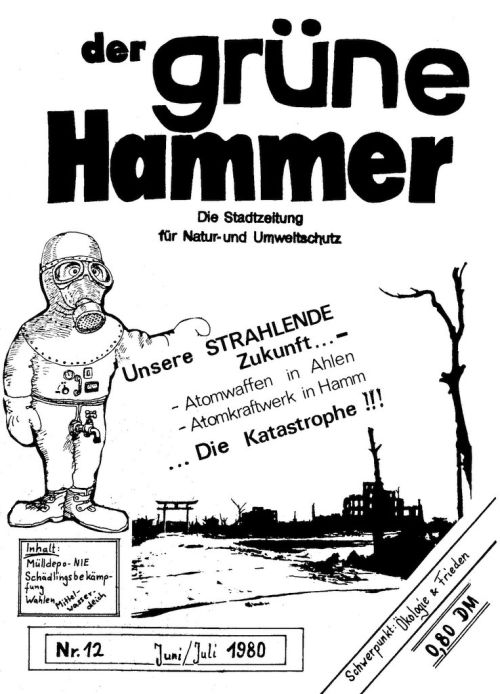