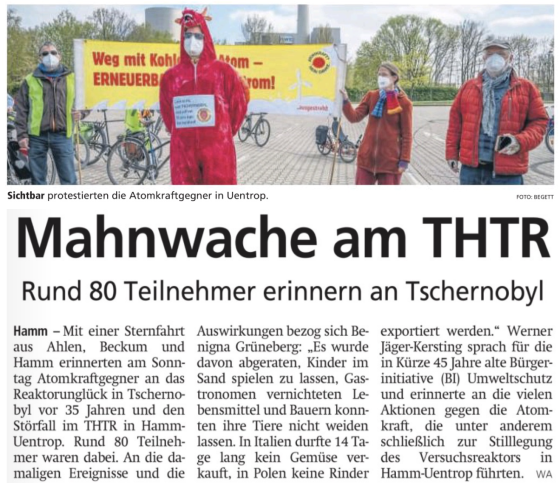 35 years ago: Chernobyl disaster and at the same time an incident in the THTR Hamm!

Of course, the corona rules apply: keep your distance and wear a mask. The event is registered and has been approved subject to conditions and is currently confirmed again. 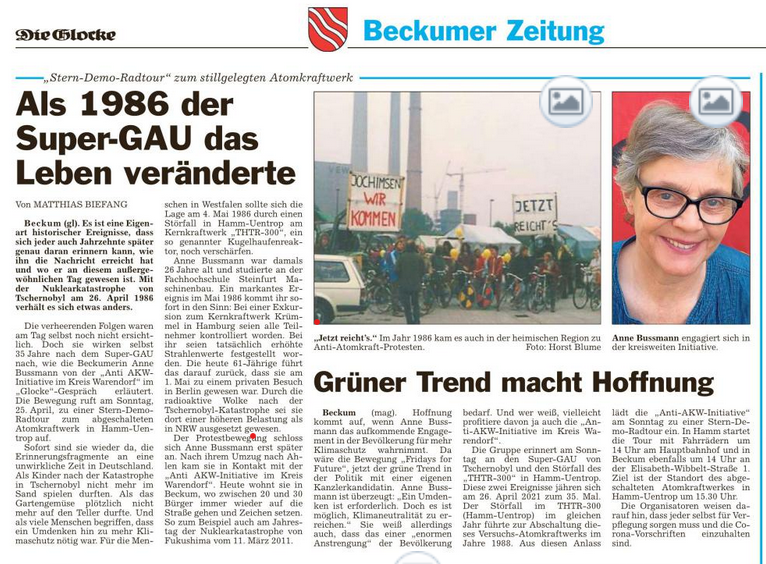 "You can achieve a lot with perseverance"

Horst Blume, born in 1954, has been active in the citizens' initiative against the THTR nuclear reactor in Uentrop since 1976 and has been publishing the THTR circular for 20 (33!) Years. He is a co-organizer of the vigil, which is to commemorate the nuclear disaster in Fukushima, Japan 11.03.2021 years ago on Thursday, March 17th, 18 from 30 to 10 p.m. in front of the Pauluskirche ... 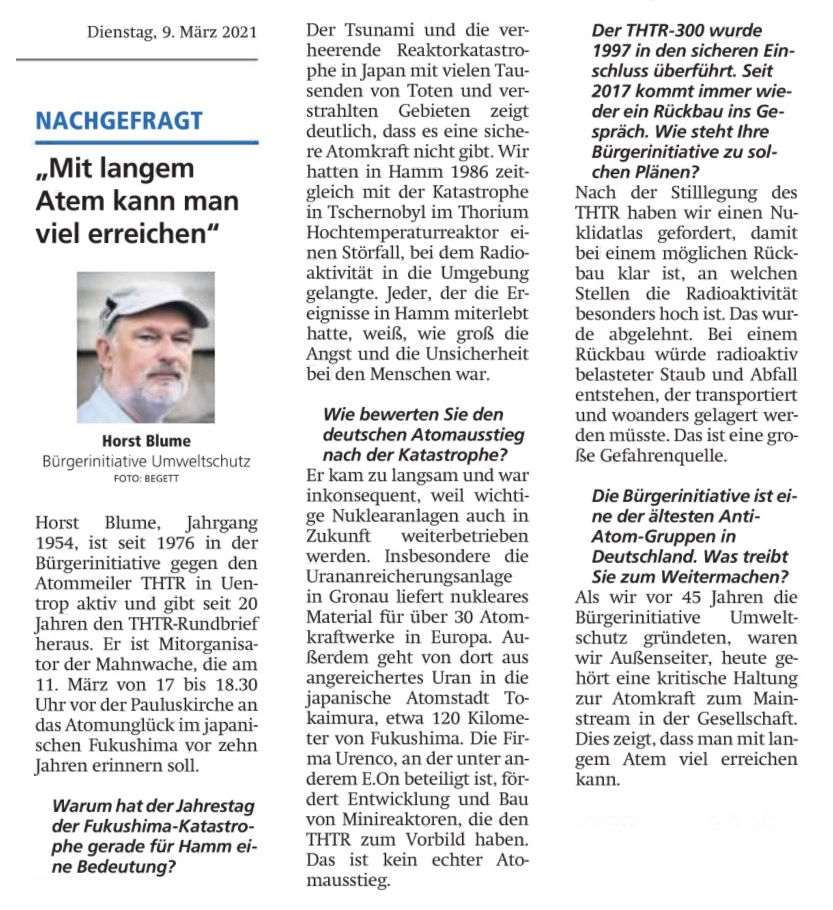 The THTR in Uentrop was supposed to become a real marvel of technology and establish a new generation of nuclear power plants. But the system was prone to failure and hardly produced any electricity. It went offline 22 years ago. In the mid-1990s, more than half a million fuel elements were transported to an interim storage facility in Ahaus, which was sealed by THTR. It became quiet around the reactor - 295 tons of radioactive waste are still stored in it. How can that be? The WA has ventured inside the Hammer nuclear power plant. 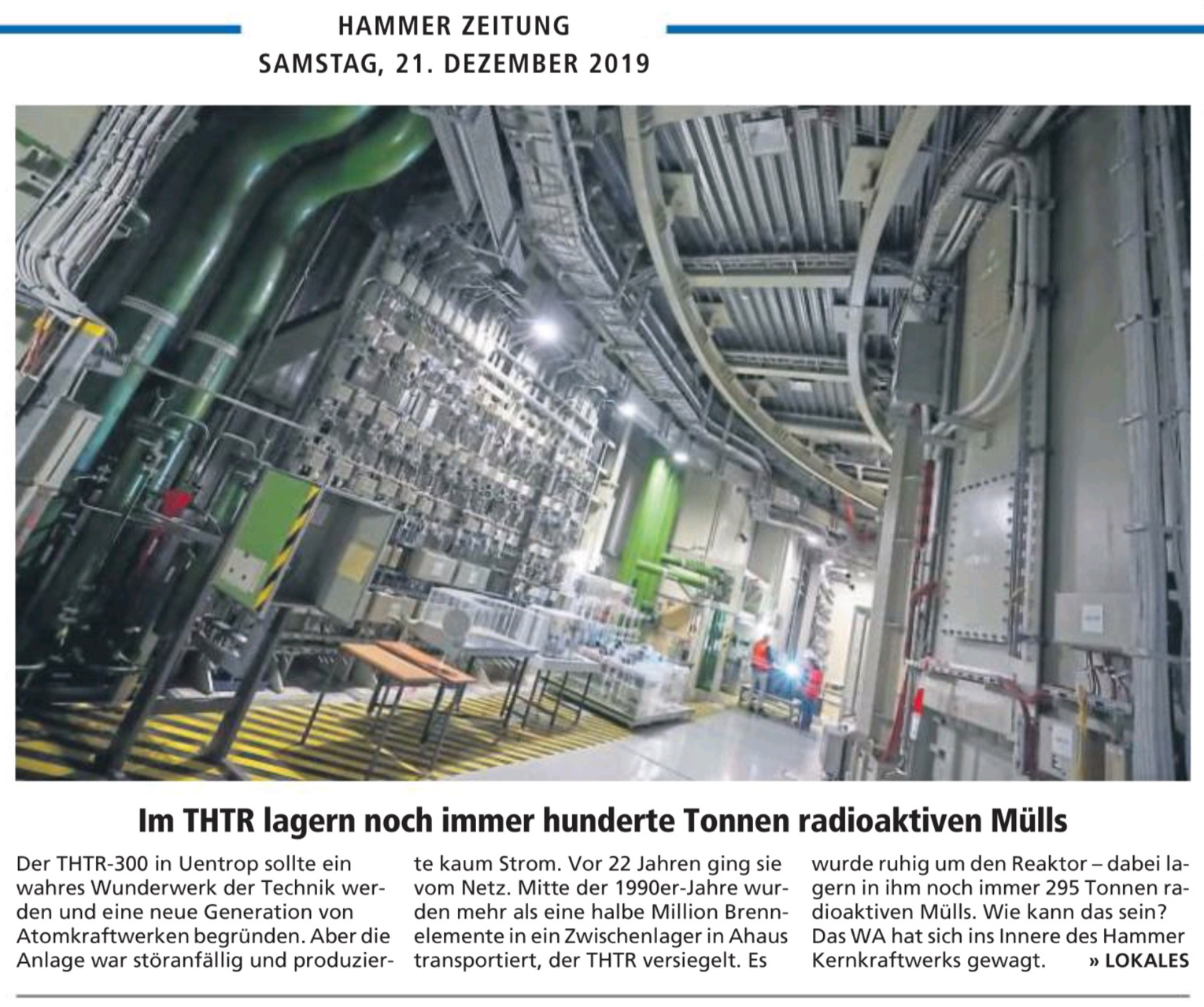 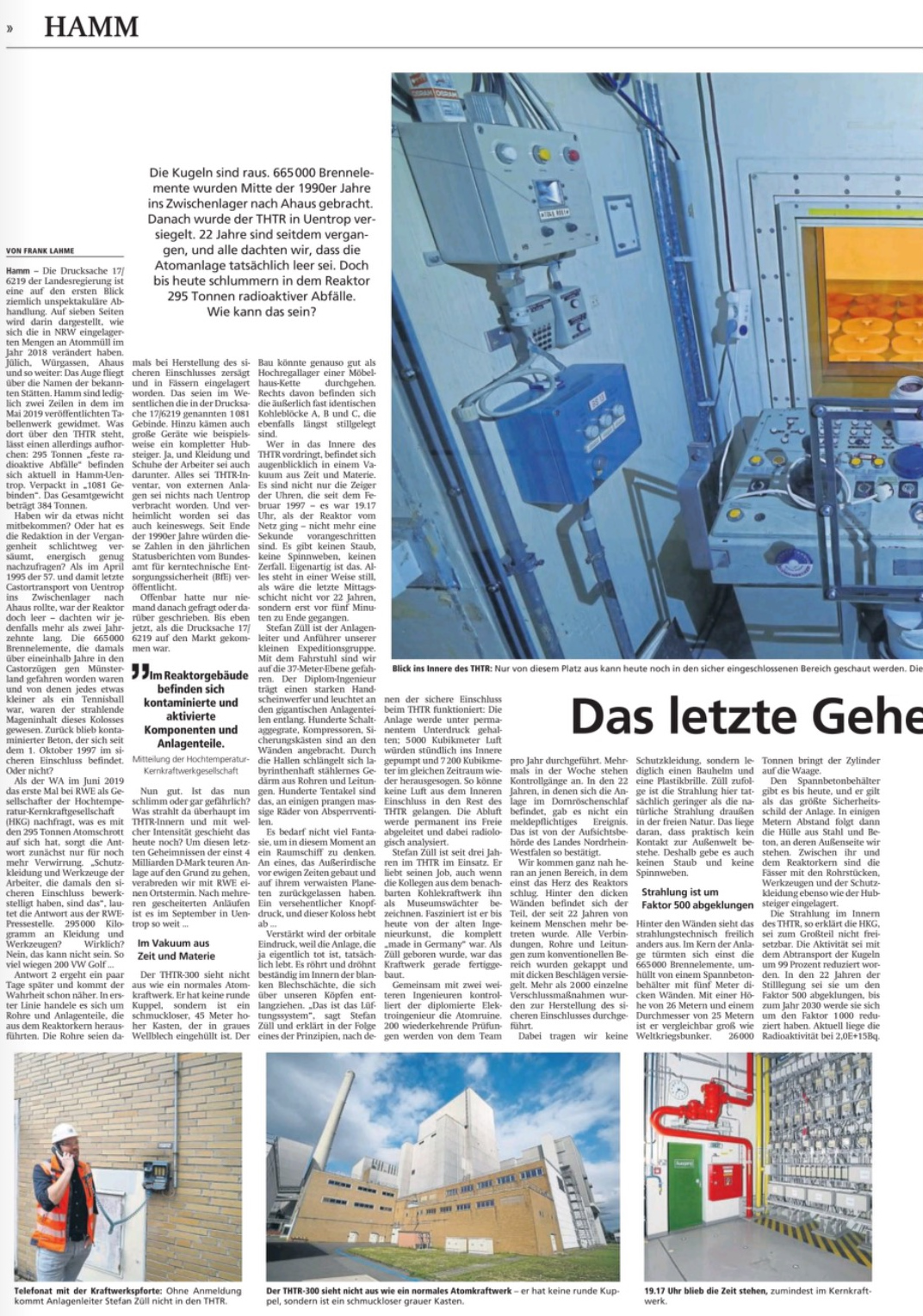 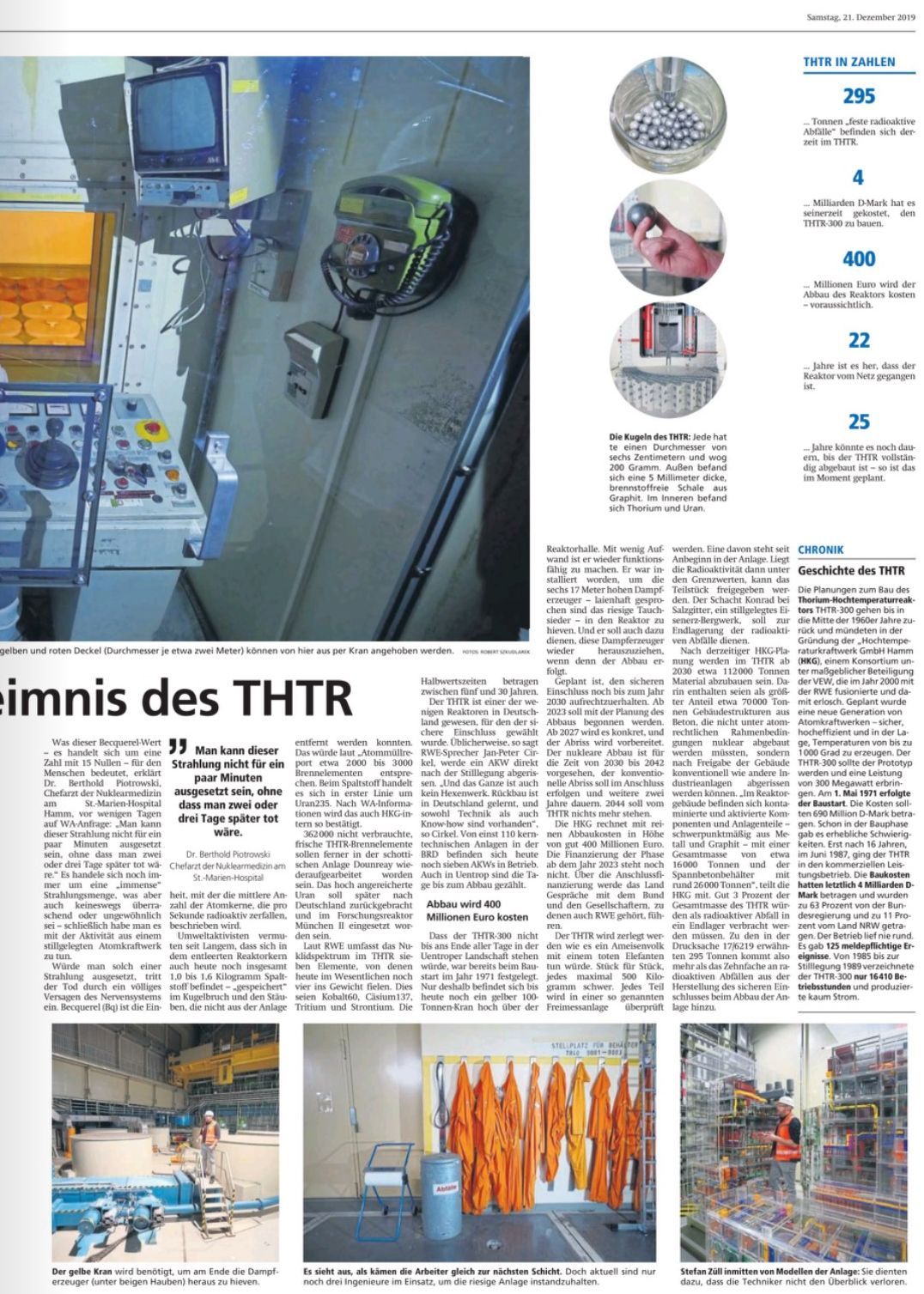 Environmental activists stop uranium extraction on the way to Hamm 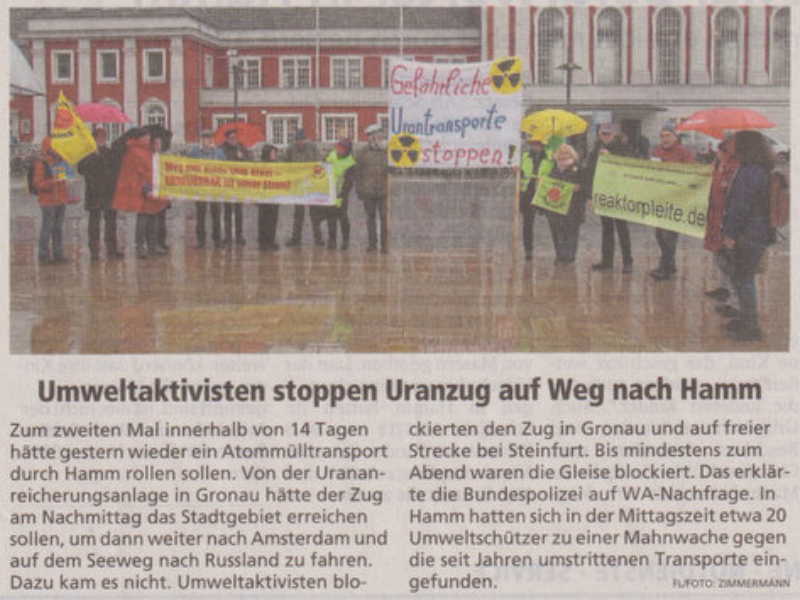 For the second time within 14 days, a nuclear waste transport should have rolled through Hamm yesterday. From the uranium enrichment plant in Gronau, the train should have reached the urban area in the afternoon and then continued to Amsterdam and by sea to Russia. It didn't come to that. Environmental activists blocked the train in Gronau and on the open road near Steinfurt. The geise were blocked until at least evening. That said the federal police on WA-inquiry. In Hamm, around 20 environmentalists attended a vigil against the long-term controversial transports. 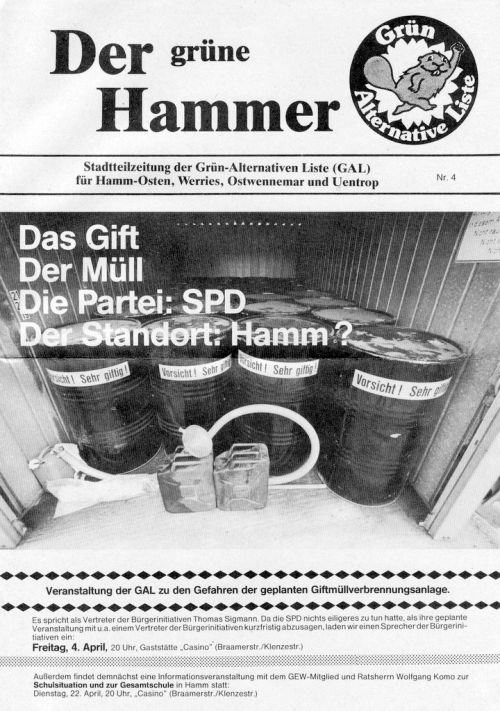